One of the great things about commuting from home is having the same studying environment I’ve had for years. Though I tend to be a student who rarely puts forth a genuine effort to study, with the end-of-block exam approaching, I needed to find a new venue which would force me to focus. The year I had off between undergrad and med school has really made me rusty. 😉

I found a study room at school, so I decided to take on a new strategy – using the white board. I tried to write down every major topic I could think of, and this indirectly brought other topics into view. Here’s a part of the white board which endured my wrath. 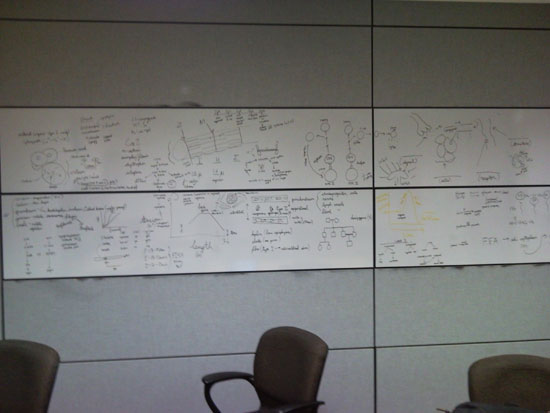 After writing the topics and trying to think of all the minor details associated with each, I had a general idea of where my weaknesses were – embryology and immunology. I wasn’t surprised one bit. They’re both classes I wish I took at some point in undergrad, but couldn’t due to early graduation. Oh well, learning about the IgM pentamer activating complement proteases and how the epiblast differentiates into all three fundamental germ layers can’t be that hard, can it? 😉

After trying this technique out, I’ve come to a conclusion. The best way for me to study is what it has always been – pacing around with my head in the textbook, flashcards, lab manual, etc. There’s no substitute!