A few days ago, I attended a symposium put together by MD Anderson Cancer Center and Baylor College of Medicine. The topic: Development of Non-Coding RNA for Cancer Therapy. Having been out of school for over half a year, I thought I might find it difficult to keep up with the material that was covered, but fortunately, my mind hasn’t gone to mush quite yet. 🙂 I’ve always envisioned myself in one of two medical specialties – neurological surgery or oncology; since this symposium was about the latter, I was eager to see what new therapies are on the horizon for oncology. 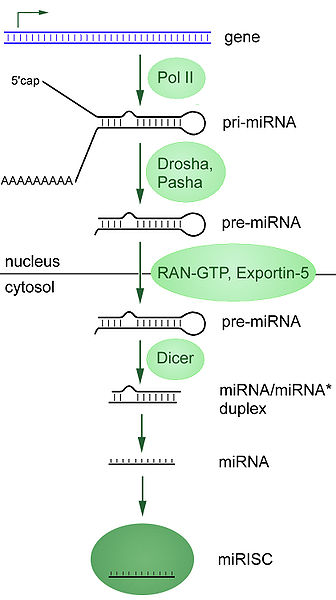 The overwhelming majority of our genome (the complete set of human genes) is actually “junk DNA” which doesn’t code for a specific protein. So why is it there to begin with? Well a big reason is it increases the likelihood that a spontaneous mutation somewhere in the genome will NOT harm our actual coding regions. Scientists also theorize that these non-coding regions participate in regulating the expression of genes. At the symposium, I finally had an opportunity to learn another role for these seemingly useless spans of DNA.

Now let me go back. It’s not appropriate to say that the aforementioned “non-coding” sequences code for nothing. In reality, they’re still transcribed into mRNA, but these transcripts doesn’t get translated into viable proteins. A select few of these transcripts will ultimately become microRNA (miRNA), but as soon as they’re transcribed, the resulting 21-23 bp transcript is known as pri-miRNA. The diagram illustrates how the pri-miRNA becomes mature miRNA through a series of enzymes (namely Drosha and Dicer). Oh, and if these enzymes sound familiar, it’s because they’re the same ones we discuss in the context of RNAi (RNA interference). Kind of cool how everything comes full circle. 🙂

So what’s the big deal with miRNA? Well, different families of miRNAs have been shown to have varying levels throughout embryonic development, and parallels have been drawn with the levels of miRNA found in cancer cell lines. The mature form of Let-7, a type of miRNA, has been shown to have reduced levels in cancerous cell lines compared to healthy cell lines. This made scientists wonder whether or not the maturation of Let-7 was being inhibited by something, thereby promoting oncogenesis. A protein known as Lin-28 has been shown to bind to Let-7 in its pre-miRNA form and prevents it from maturing.

Ta-da, there’s our competitive inhibitor. So now if we could prevent Lin-28 from binding to the pre-miRNA form of Let-7, then Let-7 could mature (just like it does in healthy cell lines). Researchers overcame the inhibition by introducing synthetic transcripts of Let-7. That’s enzyme kinetics 101: to overcome a competitive inhibitor, increase the level of substrate. Now, more of the Lin-28 was being sidetracked to the “dummy” transcripts, while Let-7 was finally able to mature.

This therapy actually showed a decrease in the rate of cancer proliferation in murine models making its potential as a “cancer treatment” in humans increasingly favorable.