Think about how often you or your friends use their cell phones. Taking a quick look at my mom’s call history, she was on her cell for an average of two hours a day for the month of July. All that radiation… sheesh. Cancer and other associated brain disorders are an obvious certainty for her. Or are they? 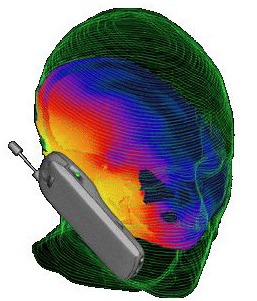 It doesn’t make sense how much we worry about cancer when we’re the ones, for the most part, who can prevent/postpone the onset. Breathing city air can cause cancer. Going outside can cause cancer. And for those who are content on breathing purified air while staying indoors, you’re out of luck too – aging causes cancer. It’s true that cancer is no laughing matter and prevention should be important (especially for seniors). However, this doesn’t mean we should compromise the luxuries of technology. Cell phones are routinely accused of emitting radiation directly to the brain therefore being a great threat to the user’s health.

Let’s use some simple logic. In our technological era, all electrical devices emit radiation of varying levels and types. Heck, the granite countertop in my kitchen may be emitting dangerous levels of radon gas (a known carcinogen) without me even knowing. It’s true that cell phones are far more prevalent than other “luxuries”, but there are measures that can be taken to minimize the amount of radiation one is exposed to. For example, purchase a phone based on documented radiation emissions. I use an LG Voyager which has a SAR (specific absorption rate) of 0.765 watts/kilogram. This is a moderate SAR rating compared to other phones. Hands free technology (ie, Bluetooth) will also reduce one’s exposure to the radiation. Imagine our phones having to transmit/receive signals from cell towers which may be miles away. That’s a pretty strong radio frequency compared to the signal given off by a Bluetooth headset from a few feet away.

To conclude, just use some common sense when using your cell phone. Yes, they give off radiation, but there’s no scientific fact that conclusively states the connection between cell phones and any form of cancer. Experimental results have not been reproducible in laboratory animals. Regardless, in our pursuit of “minimizing the risk”, we have to cut exposure to radiation wherever possible. Reducing your cell phone usage and/or investing in hands-free devices may contribute to this effort.

A Tribute to Dikembe Mutombo

The Chaos Of Black Friday